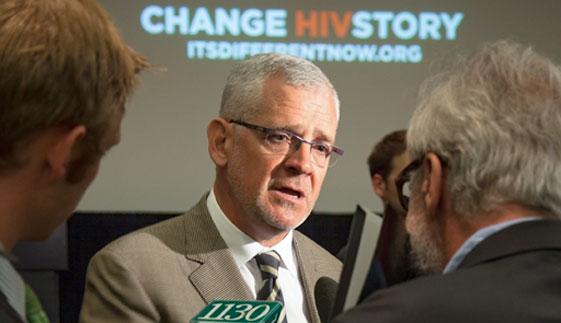 Vancouver, BC— Vancouver Coastal Health and Providence Health Care unveiled a bold new campaign today to stop HIV in Vancouver. CHANGE HIVSTORY makes Vancouver the epicentre of a movement that will change history: the beginning of the end of HIV.

Building on the momentum of It's Different Now, an HIV awareness campaign that helped increase testing rates in Vancouver by 37%, CHANGE HIVSTORY aims to inspire and empower people via a social media campaign featuring a moving and dramatic video. The campaign enables individuals to power the movement, by encouraging every person who's ever been sexually active to have an HIV test.

“CHANGE HIVSTORY is about creating a movement here in Vancouver to change the course of history by changing the course of HIV,” says Dr. Réka Gustafson, Medical Health Officer and Medical Director of Communicable Disease Control for Vancouver Coastal Health. “And with people in Vancouver requesting HIV tests and doctors recommending them as part of everyone's routine health care, we are getting closer to making the end of HIV a reality.”

“We already made history in June when St. Paul's Hospital was the first emergency department in Canada to offer routine HIV testing to every patient,” says Scott Harrison, Program Director, Urban Health, HIV/AIDS, at Providence Health Care. “Now, we want to change history on a local and global level, and finally put an end to HIV. Forty per cent of people infected with HIV in Vancouver are diagnosed late with advanced HIV disease. By diagnosing people earlier, we can link them to treatment sooner, ensuring optimal health outcomes for infected individuals and greatly reducing the likelihood of transmission to those not infected.”

World-renowned HIV expert and Director of BC's Centre for Excellence in HIV/AIDS (BC-CfE) at St. Paul's Hospital, Dr. Julio Montaner, says that stopping HIV in its tracks is possible, especially since Highly Active Anti-retroviral Therapy (HAART) treatment is available to all B.C. residents for free.

“The work we have undertaken at BC-CfE for the past 20 years has helped dramatically improve HIV treatment and proven, without doubt, that HAART is highly effective in preventing the transmission of HIV between people,” said Dr. Montaner. “And if we can stop the transmission, we can stop the disease. The world agrees, this is the way forward – changing history is this simple.”

An HIV positive person on their prescribed medication is 96 per cent less likely to transmit the disease. It is estimated there are 3,500 people in British Columbia who are infected with HIV but don't know it.

The CHANGE HIVSTORY campaign is a part of BC-CfE pioneered Treatment as Prevention strategy of which STOP HIV/AIDS (Seek and Treat for Optimal Prevention of HIV/AIDS) is one component. STOP HIV/AIDS is a four-year, $48-million pilot program funded by the British Columbia Ministry of Health to improve access to HIV testing, treatment, and support services in Vancouver and Prince George.

Vancouver Coastal Health (VCH) is responsible for the delivery of $2.9 billion in community, hospital and residential care to more than one million people in communities including Richmond, Vancouver, the North Shore, Sunshine Coast, Sea to Sky corridor, Powell River, Bella Bella and Bella Coola.

Providence Health Care (PHC) is one of Canada's largest faith-based health care organizations, operating 16 health care facilities in Greater Vancouver. PHC operates one of two adult academic health science centres in the province, performs cutting-edge research in more than 30 clinical specialties, and focuses its services on six “populations of emphasis”: cardio-pulmonary risks and illnesses, HIV/AIDS, mental health, renal risks and illness, specialized needs in aging and urban health and is home to the B.C. Centre
for Excellence in HIV/AIDS.

The BC Centre for Excellence in HIV/AIDS is Canada's largest HIV/AIDS research, treatment and education facility and is internationally recognized as an innovative world leader in combating HIV/AIDS and related diseases. BC-CfE is based at St. Paul's Hospital, a teaching hospital of the University of British Columbia. The BC-CfE works in close collaboration with key provincial stakeholders, including health authorities, health care providers, academics from other institutions, and the community to decrease the health burden of HIV and AIDS and to improve the health of British Columbians living with HIV through developing, monitoring and disseminating comprehensive research and treatment programs for HIV and related illnesses.