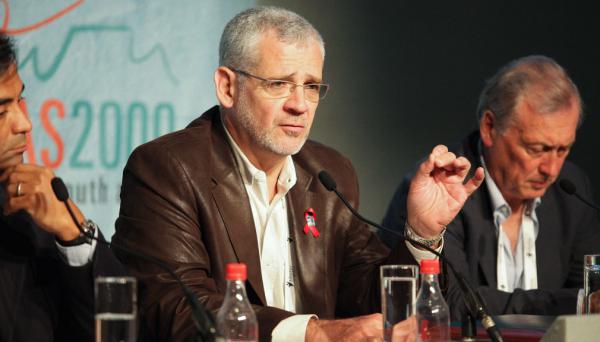 Vancouver, BC — Dr. Julio Montaner, director of the BC Centre for Excellence in HIV/AIDS (BC-CfE) and Past-President of the International AIDS Society, is calling on Prime Minister Stephen Harper, federal opposition party leaders and all provincial premiers to join him in signing a declaration to end the AIDS epidemic.

The Washington D.C. Declaration is the official declaration of the upcoming International AIDS Conference being held July 22 - 27 in Washington, D.C. This biennial meeting of more than 25,000 delegates brings together HIV professionals, and global and community leaders. The Declaration seeks to build support for beginning to end the AIDS epidemic through a nine-point action plan, including supporting strategies that are part of British Columbia’s successful HIV Treatment as Prevention strategy.

“We know this plan will work. We’ve seen the evidence in British Columbia, where the roll out of Treatment as Prevention has dramatically decreased AIDS-related morbidity and mortality and new HIV infections,” Dr. Montaner, an architect of the Declaration, writes in the letter. “As Canada’s leaders, the ability to eliminate HIV and halt AIDS is in your hands. Show your commitment to ending AIDS, preventing the spread of HIV, and protecting the health of all Canadians. Please, sign the Washington D.C. Declaration.”

Treatment as Prevention, pioneered by the BC-CfE, includes widespread HIV testing and provision of anti-HIV drugs known as highly active antiretroviral therapy (HAART) to people with HIV. The BC-CfE has demonstrated the benefits of early HAART treatment are twofold: it reduces the level of HIV in the blood, thereby improving the health of people with HIV; and decreases the level of HIV in sexual fluids to undetectable levels, reducing the likelihood of HIV transmission. A recent study led by U.S.-based investigators confirmed that HAART reduces sexual transmission of HIV by more than 95 per cent.

“Through new scientific advances and societal, political and human rights gains, we have discovered that it is possible to assemble and deliver a package of proven strategies, which, if taken to scale, can turn the tide on AIDS,” states the Declaration.

Internationally, progress against HIV has been notable but incremental. According to UNAIDS, nearly half of people living with HIV in low- and middle-income countries who need treatment have access to it and at least 2.5 million deaths have been averted since 1995. New infections in 2010 totaled 2.7 million, 21% below the number at the peak of the epidemic. Yet for each person who goes on treatment, two more are infected. At the end of 2010, an estimated 34 million people were living with HIV worldwide, an increase of 17% from 2001.

The Washington D.C. Declaration has already been endorsed by dozens of prominent international scientists in the HIV/AIDS field, including Dr. Montaner, International AIDS Society President Elly Katabira, Nobel Prize-winner Françoise Barré-Sinoussi, celebrity Whoopi Goldberg, and Peter Piot, past executive director of UNAIDS. Scientists, politicians, celebrities, and all other concerned citizens of the world are urged to sign the declaration at www.dcdeclaration.org or www.2endaids.org.

A list of current high-profile endorsers can be found at:

A copy of the letter delivered to Canadian politicians can be read here.

The BC Centre for Excellence in HIV/AIDS (BC-CfE) is Canada’s largest HIV/AIDS research, treatment and education facility and is internationally recognized as an innovative world leader in combating HIV/AIDS and related diseases. BC-CfE is based at St. Paul’s Hospital, Providence Health Care, a teaching hospital of the University of British Columbia. The BC-CfE works in close collaboration with key provincial stakeholders, including health authorities, health care providers, academics from other institutions, and the community to decrease the health burden of HIV and AIDS and to improve the health of British Columbians living with HIV through developing, monitoring and disseminating comprehensive research and treatment programs for HIV and related illnesses.