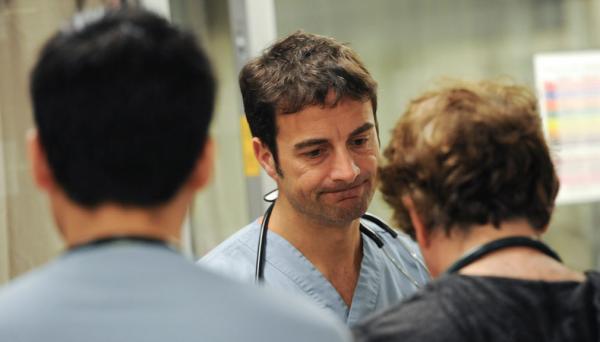 The St. Paul’s Hospital emergency department is no Disneyland, but they’ve taken a page out of the amusement park’s book to cut the time people wait in line. And the faster patients get treatment, the more money the hospital gets.

Because St. Paul’s receives up to 300 emergency patients a day, with many Vancouver residents using it as their primary point for medical care, cutting wait times is crucial.

Sick or injured people first face the triage desk. Whether they’ve walked in or been carried or brought in by ambulance, patients will receive an initial evaluation by a triage nurse. That highly experienced nurse — who may see more than 100 patients in a 12-hour shift — is charged with selecting which of three streams a patient will be sent along: to the “acute” facilities for serious problems, to the “rapid-assessment zone” (RAZ) for less critical injuries and sickness, or to “fast track” for minor issues. “I’m looking to see if they’re in distress,” says triage nurse Tina Apter, 36. “Then we start with their story and ask them what brought them to the emergency department, and how we can help.”

Patients are rated on a scale of 1 to 5, denoting the severity of the problem. Codes 4 and 5 involve minor fractures, cuts and bumps to the head, and sufferers typically go to fast track. “If you come in here with a cut in your hand,” says emergency department manager David Brown, “you want to have your cut sutured and leave.”

Code 3 patients, with more serious injuries and illnesses that require a doctor’s assessment, are usually sent to the RAZ, where they’ll be given either a seat, or put on a gurney in the waiting room or treatment area.

Patients classed as Code 1 or 2 are routed into acute-care beds, or to one of two trauma bays if they have critical injuries or ailments such as gunshot wounds and heart attacks. Code 1 patients receive immediate attention.

“You can instantly, as a triage nurse, say, “that’s a 1, or a 5,” says Miriam Stewart, a hospital program director.

Waiting patients often receive preliminary care such as cardiac graphing or blood sampling for tests. Test results can be ready within an hour, available to the examining doctor.

Emergency at St. Paul’s gets patients in front of a doctor, on average, in 40 minutes, the fastest in the Lower Mainland, Stewart says. Patient numbers, however, keep climbing. Last year, emergency saw about 5,000 patients a month. This year, 7,000 to 9,000 are coming through the doors. “It’s gone up every year,” Brown says. “As fast as we try to improve, the volume goes up and it takes us back.”

In 2008, St. Paul’s emergency received 58,747 patients. By 2011, patient volume had swelled to 67,732. Patients get frustrated at waiting, but should remember that others coming in later may be seen sooner if they have a more serious problem, Brown says. “What people don’t understand is we triage based on who needs to be seen for what,” Brown says. The top three complaints of patients showing up in St. Paul’s emergency are abdominal pain, lower-extremity injury such as a broken or sprained ankle, and lacerations. Chest pain is another common complaint.

A patient with a shocking wound may be better off than one apparently resting quietly.

“If someone’s sitting up talking to you with a knife in their chest, it’s pretty minor. They’re holding their own,” Brown says. “It’s the people that don’t make a lot of noise that you have to worry about.”

The department’s advances were driven in part by Dr. Lawrence Cheng, who returned to St. Paul’s from getting a public health master’s at Harvard “fired up” to apply business practices to the emergency department. Cheng led a team who visited Vancouver’s airport, studied Toyota’s production systems and examined queue-cutting initiatives at Disneyland. “You can’t deliver good-quality clinical care unless you have got clinical excellence and business operational excellence,” Cheng says, noting that while patient numbers have climbed, the emergency department has continued to reduce wait times.

“I can remember coming in here one Sunday,” says Brown, who has worked at St. Paul’s for 21 years, “and we had 30 patients lining the hallways.”

Adds Stewart: “If emerg is full, it’s not safe for patients.”

Although Monday afternoons and weekend nights are often very busy, it’s impossible to anticipate emergency patient numbers or the severity of patient conditions. “We don’t know what’s going to come through the door,” Stewart says.

In a week of interviewing St. Paul’s patients, The Province found an almost universal admiration for the work of the staff, and consistent complaints about wait times. “The check-in takes a long time, like 10 minutes,” says Brianna Proulx, 23, of Vancouver, suffering from appendicitis. However, Proulx waited less than five minutes after check-in to see a doctor, and was impressed with emergency staff. “They’re all really super nice,” Proulx says. “They’re really attentive.”

Jackie Kaltenbach, 55, a Crohn’s disease patient who has had seven operations at St. Paul’s and is now “beyond surgery,” says from her acute-care bed that a procedure was once delayed four days by a communications breakdown in emergency, but the busy staff provide good, knowledgeable care.

“Everyone’s running in a bunch of different directions and they’re very exhausted and worked off their feet.”

“You can bring as many people into emerg as you want, but if you can’t get people out, we’re crippled,” Brown says.

B.C. emergency departments have another incentive to get patients treated quickly. Under a provincial “pay-for-performance” scheme begun in 2007, emergency departments receive $600 for each patient admitted to a hospital-ward bed in less than 10 hours, and $100 for every patient they treat and discharge within two hours for minor problems and four hours for moderate problems.

Pay-for-performance brought St. Paul’s $580,000 in the 2007/2008 and climbed steadily to $2.8 million this fiscal year. That money is put back into hospital units to improve patient flow, Stewart says.