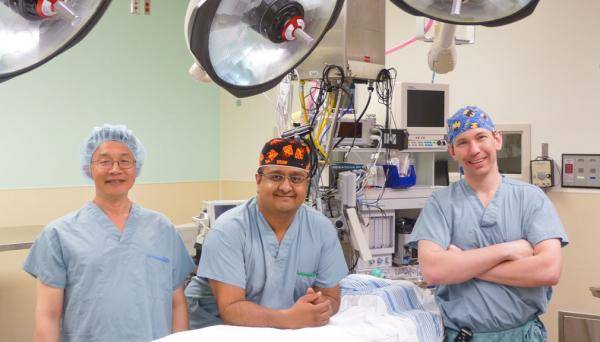 Vancouver, BC — BC Transplant and transplant recipients across the province are celebrating this summer with a record number of transplants performed in one month. July 2011 set the record for overall transplants in B.C. as well as the record month for liver transplants.

The total number of transplants performed in July was 35, which is the highest number ever in a single month and the highest since BC Transplant, an agency of the Provincial Health Services Authority (PHSA) was formed 25 years ago. The previous record was in September 2007 with 34 total transplants.

These transplant surgeries were performed by highly-skilled teams at Vancouver General Hospital, St. Paul’s Hospital, and BC Children’s Hospital.

“Some of these patients have been waiting over a year for their transplant, and it was gratifying to see so many patients getting a second chance at life,” says Tara Smith, RN, recipient coordinator, VGH.

Many of the recent liver transplant recipients, including Terry Gill and Wendy Mackinlay, are already at home and well on their way to recovery.

Nine years ago, Gill was diagnosed with primary sclerosing cholangitits, a rare degenerative bile duct condition, which required a liver transplant. For over a year before the transplant, he was extremely sick and suffered weight loss, fatigue, lack of appetite, and confusion. The transplant changed this father of three young children forever.

“I’m lucky to be alive today,” says Gill. “It was truly the ultimate gift. To receive the gift of life is a humbling experience. My family and I are forever grateful for my second chance. Every day, I thank my donor and their family for their decision to donate.”

Gill, who was not previously registered as an organ donor himself, now knows the true value of taking the time to register with B.C.’s Organ Donor Registry at www.transplant.bc.ca. “Because of my personal experience, my family and I have all signed organ donation cards,” Gill says. “I want to raise awareness about the importance of organ donation. I hope that by talking to whomever I can, I might help another person like me.”

Mackinlay was diagnosed with an autoimmune disorder called primary biliary cirrhosis five years ago that had attacked her liver. Fluid that had accumulated in her abdominal cavity had to be drained several times, and she had surgery to have a stent put into the portal vein of her liver. She also had serious problems with a hiatus hernia which resulted in a portion of the hernia becoming twisted into the bowel. Mackinlay had been in considerable pain and even went into a coma.

When she got the call to come in for the transplant, Mackinlay was excited, frightened, and nervous. But those emotions quickly turned into happiness.
“After my surgery, I felt this surge of pure energy and joy,” she says. “I have felt continued joy to be alive. I want to thank the anonymous family of my liver donor for this gift of life. And I also want to express heartfelt thanks to the entire liver transplant team for their all-encompassing care.”

“We think this dramatic increase in transplant activity can be attributed to the work of ICU physicians across the province who are increasing awareness around organ donation by talking to the families of potential donors,” says Dr. Charles Scudamore, Medical Director, Liver Transplant Program, BC Transplant.

“The success of our program stems only from the generous gift of life and the remarkable legacy left behind by the donor and their families,” continues Dr. Scudamore, who is also a liver transplant surgeon at Vancouver General Hospital. “We extend our hearts in sincere gratitude for their gift during a difficult time in their lives.”

There are many factors that contribute to the number of organ transplants performed each year, such as organ suitability and match on the waitlist as well as awareness of and registration on B.C.’s Organ Donor Registry. In addition, programs such as PHSA’s Living Donor Expense Reimbursement program (administered by the Kidney Foundation of BC) and the National Paired Kidney Exchange (operated by Canadian Blood Services) enable more people to be living donors, and deceased organ donation is no longer limited to patients who died as a result of brain death but now includes cardio-circulatory death.

It takes only a few minutes to register your decision on organ donation on B.C.’s Organ Donor Registry at www.transplant.bc.ca. What are you waiting for? Do it today!

Interviews are available with:

BC Transplant is an agency of the Provincial Health Services Authority (PHSA), one of six health authorities in British Columbia. Established in 1986, BC Transplant is a comprehensive healthcare organization responsible for all aspects of organ transplant in BC.

Today in British Columbia, there are more than 400 people on the waitlist to receive a solid organ transplant.

B.C.’s Organ Donor Registry is the only one of its kind in Canada. It was created to provide British Columbians with a secure and legal way to record first person consent for organ donation and is accessible to healthcare professionals in every hospital in B.C. Healthcare professionals can search the registry for a record of an individual’s decision using their Personal Health Number (BC CareCard).

The registry removes the need for family members to make the decision about organ donation at end-of-life. The registry offers four choices, including the option not to be an organ donor. It’s important that every British Columbian register regardless of their decision.

More than 801,329 British Columbians have registered their decision on the registry. This represents approximately 17% of the provincial population.
There are two ways a person can register on the Organ Donor Registry

1. Individuals can register their decision online at: www.transplant.bc.ca.
2. An individual can register using a hard copy (paper) registration form.

An individual can confirm if they have already registered on the Organ Donor Registry by visiting: www.transplant.bc.ca or calling 1-800-663-6189.