Providence In the News

Visit The Daily Scan for your daily health news 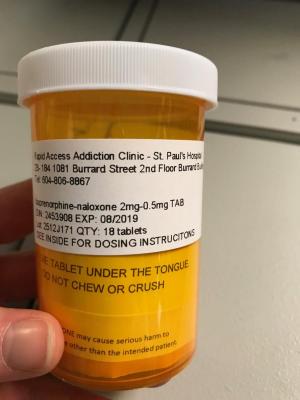 A leading-edge pilot project in the St. Paul’s Hospital Emergency Department (ED), in collaboration with the VCH Regional Addiction Program, will provide opioid overdose patients with take-away doses of treatment upon discharge.

A major gift from a generous donor has made it possible for Providence to begin making changes in the north wing of one of its seniors’ residences, Holy Family Residence, to reflect the attributes of, and ultimately transfer to, the new bricks-and-mortar dementia villages Providence envisions for both Vancouver and Comox.

Canada’s Digital Technology Supercluster officially launches with $153M in funding from the Ministry of Innovation, Science and Economic Development and funding commitments of over $200M from members.

Born when the cherry trees outside St. Paul’s Hospital were in full bloom, baby Sakurako will be two weeks old on Mother’s Day.

Initiative estimated to create 50,000 jobs and inject $15 billion in GDP into BC’s economy over 10 years

A Vancouver cardiologist is unveiling a revolutionary heart valve surgery. It reduces recovery time from months to a just a few hours. And Dr. David Wood says not only does his technique spare patients a massive operation, it saves the health care system money. Robin Gill has more on the remarkable new procedure.

In the early 1970s, when I was a pathology professor at McGill University — home to one of North America’s most prestigious lung-research centres — I paid St. Paul’s Hospital in Vancouver a visit. I was impressed by its clinical and teaching programs that underpinned the hospital’s pulmonary care.

Help needed for mothers who want to abandon their newborns, say advocates

It's a sad fact that every year in Canada, mothers who can't care for their newborn infants abandon them in places where they are left to die.

The Canadian city where addicts are allowed to inject (Crosstown Clinic)

As the opioid crisis spreads across North America, the Canadian city of Vancouver is pioneering a radical approach to drug treatment - let addicts use.

Doctors use prescription heroin to treat those with severe opioid addictions

In response to an advisory issued by Health Canada, patients who had heart surgery, heart transplant surgery or lung transplant surgery in BC where heart-lung bypass was required are being notified of a small risk infection associated with the type of machine used to warm and cool blood during surgery, known as a heater-cooler machine.